Near the end of that meeting, our leader shared a brief story from a recent hiking experience in western North Carolina. My friend and her family were near Winding Stair Gap in the Nantahala National Forest. 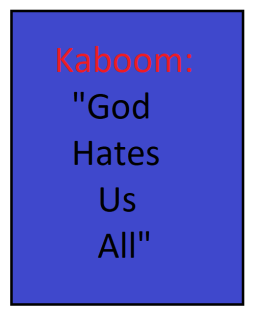 She noticed a young lady with a tattoo on one of her legs. Initially, all my friend could see was the top of the cross tattoo with the word—“God.” Curious, my friend wanted to know the remaining words from the tattoo.

As they were preparing to exit the shuttle bus, the cross tattoo came into clear view, and it stated:  “God hates us all.”

My friend felt an immediate urge to ask the young lady about the tattoo. She wondered what might have prompted a person to choose such a statement for public display. But respecting, the young lady’s privacy and freedom of speech, my friend didn’t approach her.

Initially, my friend was a bit shocked, and then very sad as she wondered even more about the reasoning for the young lady choosing this tattoo.

I too became curious about the statement. A few weeks after our meeting, I googled “God hates us all.”

The first link to come up was attributed to an American thrash metal band named Slayer. This was the title to their ninth studio album.

In a Wikipedia article, I learned that the album themes focused on a variety of topics—“religion, murder, revenge, and self-control.”

Even the album’s cover, a Bible with nails driven through it and splattered in blood created a stir. An alternative cover sleeve was designed so that retail outlets could display the album. Plus, the cover already had the record industry’s  parental advisory label on it for explicit lyrics.

Interestingly, guitarist, Kerry King, who wrote most of the lyrics on the album stated in an interview with Guitar World the following:  “I definitely wanted to put more realism in it, more depth. God Hates Us All isn’t an anti-Christian line as much as it’s an idea I think a lot of people can relate to on a daily basis. One day you’re living your life, and then you’re hit by a car or your dog dies, so you feel like, “God really hates me today.”

I am constantly amazed and reminded about how many layers are in our world. Layers that I know absolutely nothing about. Slayer and their music would be one of those layers. But, I think I understand what Mr. King is referencing in his comments about living life.

Perhaps, like me, you have experienced something I call the kaboom moment. A kaboom moment is an unwanted and unexpected intrusion into my daily living experiences. A kaboom quickly changes everything, and without fail, I blame my pal, God.

In my mind, cancer might be one of the worst kaboom moment offenders.

Kaboom—A friend who a few years ago lost one of her daughters in a tragic collision with a car while riding her bicycle has just been diagnosed with breast cancer.

Kaboom—Another friend at church buried her husband in March after he lost his duel with cancer.  Four months later, she is planning the funeral service for her son who also lost his intense encounter with cancer.

No matter where I look in all those layers of the world, we all experience kabooms, and sadly kabooms aren’t always short-term disruptions.

And, I know myself well enough that deep inside my heart, in the quietest, agitated whisper I have, I’m asking God—“What are you doing? Where are you in this?  Why did you let this happen? How could you double kaboom a person?”

Now, in fairness to God, he might be looking down, scratching his head, and asking similar questions about how I respond to the kabooms?

Back on April 25, the quote of the day from the Daily Skimm was this:  “Repetitive, self-contradictory, sententious, foolish”—GQ, explaining why the Bible is on its list of books you don’t have to read.”

This article titled— “21 Books You Don’t Have To Read” was composed by the editors of GQ (Gentlemen’s Quarterly magazine). The editors also provided recommended alternatives to each book that made the list.

Ok, I have a confession. Until several years ago, I was not a reader of the Bible. And, I might agree with a couple of the comments from the GQ editors.

But, the word “sententious” caught my attention. The word is not in my daily vocabulary. So, I looked it up: “given to moralizing in a pompous or affected manner”. Synonyms included: pious, self-righteous, preachy.

Made me wonder what “sententious” has to do with “God hates us all”?

Is the future of the church socially and emotionally grounded in understanding “God hates us all” and the Bible being on the GQ not required reading booklist?

Maybe churches need a kaboom moment— a dose of reality.

Hey church wake up, the world has changed. Don’t get left behind mired in your past.

Church, the past is important, but holding on to every piece of it probably will not nudge what remains of your congregation into the future.

Church, put on your thinking cap.

Find the courage to take a look at your current status. Assess what’s working and what’s not working—do not be afraid to prune.

And church, maybe your future really comes down to this—can you, me, we “listen without judging?”

The voices inside and outside the walls of our churches need some quality listening time.

Could listening be the kaboom moment for the future of the church?

Church what can be learned from a tattoo and a GQ booklist?

Church are you listening?