Church office staffs answer a lot of phone calls. Those calls cover a wide range of needs. But without question, the toughest calls are the out of the blue ones when a member calls to report the unexpected passing of a loved one.

That happened on Thursday, November 2 for a church member and her family. Their 39-year-old son had passed away. No accident related to a vehicle or job, no medical failure, no crime incident had taken his life— no it was that old demon of darkness.

Despite a loving family and appropriate care the demon revved up the pressure one evening. The wiring in the brain snapped. He made a decision. There was no turning back.

That battle with the demon is relentless. It’s the demon’s bag of tricks and the mind games that wear a person down. Moments of calm happiness can instantly be disrupted pushing rational thought and reasoning aside. Pressure builds, practical options become impractical, and the point of no return becomes the focus.

This young man had been battling the demon for a while. Pockets of success were countered with pockets of misery. All of those ups and downs only serve to frazzle a person even more.

Those unexpected losses have hit close to home during the last few years. The demon of darkness took my wife’s oldest sister, a peer from my days as an educator, and a neighbor’s brother.

Stories of such losses are all around us.

Author Tom Wolfe’s book The Right Stuff was made into a movie of the same title. Wolfe’s book reveals the development of America’s space program, and carefully acknowledges the courageous test pilots who placed their lives in danger chasing a different type of demon.

The opening scene in the movie features a narration of screenwriter, Philip Kaufman’s words. Black and white film images of tarmacs filled with ground crews, pilots, and airplanes immediately capture the viewer.

“There was a demon that lived in the air. They said whoever challenged him would die. Their controls would freeze up, their planes would buffet wildly, and they would disintegrate. The demon lived at Mach 1 on the meter, 750 miles an hour, where the air could no longer move out-of-the-way. He lived behind a barrier through which they said no man could ever pass. They called it: The sound barrier. Then, they built a small plane, the X1, to try and break the sound barrier. And men came to the High Desert in California to ride it. They were called test pilots. And no one knew their names.”

I think our church member’s son experienced a similar torment from the demon.

In his 39 years of living, I’m sure our church friend’s son challenged the demon. But a human being’s controls can freeze up too. The turbulence of day-to-day living can cause uncontrollable buffeting. That buffeting creates an inability to ride life any longer.

According to data from the National Institute of Health, in 2015 suicide was the tenth leading cause of death in the United States. That same year, there were 44,193 suicides compared to 17,793 homicides. During the past 15 years, suicide rates have increased 24%.

Clearly, suicide is a demon. It is a demon that needs to be reeled in and confronted. We only need to look at the mental health needs of those individuals who have initiated horrific violence in our public schools and work places.

Mental health practitioners have made significant improvements in treatment options. Unfortunately, our health care system isn’t always cooperative in helping individuals find the appropriate treatment options, and then there is that demon.

That demon is always pushing, probing, looking for the slightest opening. The demon is impatient. This tormentor works tirelessly with a stubborn tenacity for one singular purpose— to claim another human being.

As a society, we need to be just as persistent in countering the demon’s tactics. Nonprofits like the American Foundation for Suicide Prevention are working to educate and to guide individuals and their families toward helpful services.

Our church member felt like her son was finally at peace when he brought his life to an end.

Interesting that we can build just the right plane to break that demon in the sky, the sound barrier. And yet, we still struggle to meet the mental health needs of individuals who are trying to break through another challenging barrier.

Perhaps verse 10 from Chapter 19 of Job captures what it must feel like to be at that barrier with the demon for a tormented son or daughter and their family:  “He breaks me down on every side, and I am gone, he has uprooted my hope like a tree.”

Even in these difficult circumstances when the demon uproots our hope, we must regroup.

That tormentor’s barrier needs to be broken down on every side too.

If we lose our courage and hope, then the demon will continue to win.

We can’t let that happen. Everyone deserves to reach 40.

Two mornings a week, just after 5, I’m usually at the Tuckahoe YMCA working out. Most people with an ounce of common sense are back at home still sleeping. 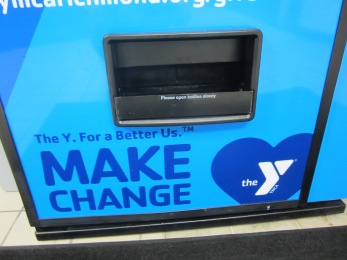 In a hallway connector at the Y are two vending machines. At the bottom of each machine printed in bold letters are the following words:  Make Change.

On the morning of Tuesday, October 17, I walked into the exercise room that I have used for many years, and I immediately noticed the room had been changed, rearranged.

I felt out of place. In truth I was boiling on the inside.  My exercise room worked perfectly for me. I had no complaints. Why make such a drastic rearrangement?

And to make this change even worst, I hadn’t been consulted. No one asked for my permission to make these changes. Of all the nerve rearranging my exercise room without my blessing.

My workout was awkward. This rearrangement had disrupted my normal routine.

A couple of staff members walked into the room, and I expressed my displeasure of this new layout. As I was leaving the building, I picked up the contact information for the director of this YMCA branch. Boy was she going to hear from me!

“The Horse Trader” episode of the Andy Griffith Show has a classic opening scene.

Sheriff Andy Taylor and his deputy, Barney Fife, are preparing to attend a town council meeting. On the agenda is a pending decision about Mayberry’s old cannon. The town council believes the worn out cannon has become an eyesore. They want to remove it.

In their pre-meeting conversation, Andy detects that Barney doesn’t like change.   In fact, Barney admits, “that he likes for things to stay the same.”

Barney shares a story about the installation of a stamp selling machine at the Mayberry post office.

This new machine just “frosted” Barney. He was so agitated that he composed a letter to the post master general. But Barney admits, he never mailed the letter because he refused to purchase a stamp from the automated machine.

Perhaps, like Barney and me you struggle with that six letter word—“change.”

Someday, I might hear this little dab of humor from a grandchild:

My granddaughter was visiting one day when she asked, “Grandpa, do you know how you and God are alike?”

That wisdom from a child holds true based upon my second visit to the YMCA after the rearrangement.

I learned from one of the employees what he had observed. He had been keeping tabs on how members who use this room felt about their disruption. His informal survey simply concluded: young members like the new layout and older members dislike it.

I’ll be 65 in June; I’m one of those older members. And yes, I was shocked by the rearrangement, and yes, I wrote an e-mail to the director, explaining why I disliked the layout.

To the director’s credit, she quickly responded and offered to meet with me. But, I don’t think I’ll take her up on a meeting. Here’s why, I was looking at this change strictly from the “me” perspective.

All I selfishly thought about was how this change was impacting “me.” Why had “my” exercise room been rearranged? Why did the leadership disrupt “my” routine? I wasn’t considering that the room belongs to the YMCA, and it is used by members from all age groups, not just rapidly aging whiny grumps like “me”.

In fact, I imagine the good Lord is about ready to whack me with a 2×4, by referring me to Galatians Chapter 4 Verse 20:  “I wish I were present with you now and could change my tone, for I am perplexed about you.”

I can understand why the good Lord would be perplexed by me, and my tone.

If I think about all of the people in this world whose lives have been recently disrupted with hurricanes, earthquakes, wildfires, and reckless political regimes, I should be ashamed of my pitiful workout room grumbling.

American author E.B. White once stated: “The only sense that is common in the long run is the sense of change and we all instinctively avoid it.”

I’ll see the words Make Change on those YMCA vending machines every morning after I complete my workout.

What am I going to do with that reminder?

Am I going to continue to perplex the good Lord by instinctively avoiding change?

Or, am I going to disrupt my life for the benefit of those truly in need?

I know what my answer should be.