Let’s get the confessions out early.

I have been a fan of the music Brian Wilson created with and without the Beach Boys for a long, long, long time.

After all Brian has lived through, I still find it amazing that he outlived his younger brothers, Dennis and Carl.

And perhaps even more puzzling to me is why Brian, at 76, is still out on the concert trail.

I can’t imagine he needs the income. Maybe touring is an escape for him as there is a wife and five adopted children at home.

But the more I think about my questions, I’m driven back to one constant in his life. No matter how good or bad living was for Brian Wilson, there was always his best friend the music—it never deserted him.

On Friday, November 2, when he shuffles out on stage at the Dominion Arts Center, (maybe with assistance back problems), Brian will be surrounded by a band of musicians who love him and his music. He’ll also have in tow his long time friend, one of the original Beach Boys, Al Jardine, and another former Beach Boy from a couple of years in the 70s, Blondie Chaplin.

Brian and the band will run through a set list of well-known songs. Maybe if the audience is lucky, one or two less known nuggets will be performed.  There might be a break before they launch into the landmark album Pet Sounds, and somehow, the band will find the energy for a few more songs during the required encore. 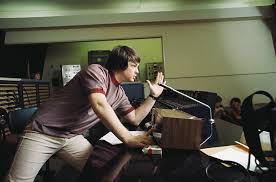 Remarkably, Al Jardine’s voice still sounds as young as he did in 1965 singing “Help Me Rhonda”. Al’s son, Matt Jardine is in the band, and Matt hits all of the high notes in the background and on some leads that Brian’s voice can no longer handle. (Although on this tour, it appears that Rob Bonfiglio is pinch hitting for Matt. Rob is Brian’s son-in-law.)

Blondie Chaplin an accomplished guitarist, and sometime back up player for the Rolling Stones is part of Brian’s show for his playful energy. You can count on Blondie singing the lead vocal just like he did back in 1972 on “Sail On Sailor” one of Brian’s chestnuts from the Holland album. And when the focus of the show does shift to Blondie, he’ll charge up the hall with his stinging guitar licks.

By 1965, Brian had given up touring to stay at home to write and produce songs for the Beach Boys to record when they came off the road. Once Brian fully jumped the Beach Boys’s ship, he worked to establish himself as a solo artist.

Ironically, in 2000, his release of Live at the Roxy Theatre was the pivot point for restarting his career. Some members of the Los Angeles based band The Wondermints became permanent members of Brian’s touring band.

Fans who attended Brian’s concerts were in for a treat with these gifted musicians. They could perform live note for note even the most challenging of Brian’s arrangements. Here we are 18 years later, and the core of Brian’s band is still anchored by founding members of the Wondermints.

Over the last several years, I’ve had the privilege of seeing Brian in concert three times. And while I wasn’t disappointed by those performances,  I’m wondering how much longer can he continue to tour? Some of the dates on this current tour were rescheduled as Brian needed immediate back surgery late this past spring.

Toward the end of July and into August, Brian returned to the road, and performed a handful of shows in the states and overseas. At the Victorious Festival in Portsmouth, England on August 25, someone backstage shot video during the playing of “God Only Knows”. This performance captures the audience affectionately singing the entire song along with Brian and the band.

The Chicago based horn player, Paul Von Mertens, who serves as the musical director for Brian’s band, reports that: “God Only Knows” always gets a big reaction. Once in Glasgow, the audience kept singing after the band finished the song. That was very moving.”

Maybe that video clip explains why Brian Wilson still tours. People continue to love him and the music he created.

Without question Brian has endured a lot of emotional turmoil.

Perhaps in trying to figure it all out, his stability is linked to a line of lyric from the Beach Boys’ song “Add Some Music To Your Day”:

“Music when your alone is like a companion for your lonely soul.”

Clearly, music has been the companion that has sustained Brian Wilson’s soul for a long, long, long time.

If you never attended a Brian Wilson concert— go.

I’d wager your soul needs it.