I had missed the Maundy Thursday program because of a school board meeting.

Early on the morning of Good Friday, I untacked the purple cloth that had graced the wooden cross on the front lawn of our church. I replaced it with torn scraps of black cloth and tacked the pieces back into the cross.

Since early in the week, the weather forecasters had everyone stirred up with predictions of severe storms for later on Friday afternoon.

I tried to focus on the details of getting us ready for Sunday.

We were anticipating the arrival of Easter lilies for the Sanctuary at some point today.

The warm, unsettled humid air was going to require our HVAC technicians to switch our systems from winter to summer.

Trinity Hall needed to be put back together after the Maundy Thursday’s program.

Before the stormy weather showed up, a few items outside needed attention.

And at some point chairs needed to be staged in the Welcome Center as we hoped for attendance that would overfill the Sanctuary on Sunday.

As the afternoon arrived, the skies opened up with a heavy rain shower. Severe thunderstorm and tornado watches and warnings were posted by the National Weather Service. Office staff took a number of phone calls from members wondering if we were going to cancel the Good Friday service because of the forecasts.

We kept an eye on the radar reports and warnings, but somehow the rough weather stayed to the west and southeast of Richmond. I agreed to monitor the weather during the Tenebrae service. But aside from another drenching rain shower just prior to the start of the service, we were lucky.

The dark somberness of Tenebrae on Friday evening was sharply contrasted with a bright just about perfect spring day on Saturday.

Chores at home on Saturday clearly wore me out, so I was dragging as I headed to Trinity a bit after 5 on Sunday morning. I had lots to do.

Cool, crisp dry air was in place—the moon was high in a clear sky. It looked to be a perfect Easter morning.

Along with the usual building rounds, the cross on the lawn needed to be transformed again. Black cloth removed, chicken wire forms put in place to hold fresh flowers.

Slowly, the behind the scene volunteers arrived. Don Boyd and Ken Hart worked in the Trinity Hall kitchen grilling fish filets for the sunrise service. Lynn Berry made final preps for communion. Associate pastor, Drew Willson, worked on staging for the Sunrise service setup, including a portable fire pit.

Three distinct aromas started to make their presence in the building. The perfume fragrance of the lilies was a sharp contrast to unmistakeable whiff of fish being cooked, and somewhere the wood smoke from the fire pit served as a median between the two. I just hoped the smoke from the fire pit didn’t set off the smoke detectors in the Welcome Center from the propped open doors.

As I was putting the finishing touches to attaching the chicken wire to the cross, a car pulled into the driveway in front of the Welcome Center. The driver put down the window and asked, “What time do you start?”

He was inquiring about the start time for the Sunrise service. I responded 6:30. The driver must have checked his watch. Because he drove a bit further up the drive and pulled over to park. He decided to stay.

The sky was slowly beginning to show the first hints of blue in the East. I started to run back through my mental checklist, and I was pretty sure I had completed my assignments.

With one final assessment, I headed back home to get something to eat and to change my clothes.

When I arrived at the house, I picked up the  newspaper off the front sidewalk and brought it into the house. The Commander Supreme was up and ready to attend the 8 o’clock service. Our son, his wife, and their almost two year old daughter were going to attend this service with us.

My breakfast was going to be a light one, as we had been invited to brunch at our son’s home later in the morning.

As I was getting ready to sit down to eat, the Commander tossed in my direction Section B of the paper. She pointed out the following headline:  United Methodists edge toward breakup over LGBT policies.

“Nice,” I thought to myself, “couldn’t the editors of the newspaper delayed the printing of this article until Monday?”

I skimmed the article, ate quickly, and hustled upstairs to get changed.

The first hymn we sang on Easter morning was “Christ the Lord is Risen Today!” There is a line in the fourth stanza that states three words— “made like him,” meaning you, me, we were made like Jesus.

I’m thinking if we truly were “made like him,” then why can’t we open our hearts to people like Jesus did? Why are we as Methodists so divided and willing to split up our church over these LGBT policies?

Author Hampton Sides wrote the book, Hellhound On His Trail, an account about the eventual capturing of James Earl Ray, the assassin, who took the life of Dr. Martin Luther King, Jr.

Dr. King had been asked to come to Memphis, Tennessee in support of striking garbage workers. The first march in Memphis in support of the workers had been a disaster. Violence broke out.

In planning a return visit to Memphis to lead another protest, Dr. King was challenged by his staff. They did not think a return to Memphis was a good idea. Dr. King became so agitated with the non-supportive attitude of his staff that he walked out of this critical planning meeting. His staff was shocked. They had never experienced an explosion like this from Dr. King.

But, his abrupt departure worked. His leadership team now felt more obligated to figure out how to move forward, and they did.

Hampton Sides assessment of this pivotal meeting came down to this—“Out of dissension, a consensus had formed.”

I wonder if this current dissension in the United Methodist Church could lead us to reach an all inclusive positive consensus regarding LGBT?

While I like to hope that we could, I sense we are too stubborn— too set in our ways.

This issue has been in front of our church for many years.

I find it discouraging that we can’t find common ground or hear  the voice of reason. Church attendance is in decline. Don’t we realize that shutting our doors to clergy and people from the LGBT communities only hurts our churches?

Dietrich Bonhoeffer once stated:  “The ultimate test of a moral society is the kind of world that it leaves to its children.”

That statement poses a lot of internal questions for me.

Do I want to leave for my children a Methodist church that is unwilling to welcome and love those who are LGBT?

Does the church’s response mean that I must stop my friendships with family members, neighbors, friends, church members, and peers who are LGBT?

Perhaps the real question for me should be—“What time do I start?”

I hope it’s not too late for me to start to “love my neighbors.”

I think the spinning of time might slow for that journey.

I need to start. Church, how about you? 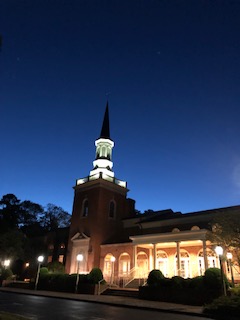